skip to main | skip to sidebar

Can you pass the salt, please?

(This is Robert's post on salt. The title of this post really cracks me up. Thank you Robert!) 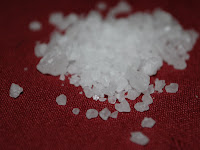 We use it to give taste to our food. We have many elaborate ways of distributing it on our Montreal streets in the wintertime in order to prevent us from slipping on the ice. We throw a pinch of it over our shoulder for good luck when we spill it. These are merely a few ways we use salt in our every day lives. Salt has been, for ages, one of the most essential elements to the human diet. In the Jewish religious tradition, the Lord tells Aaron that the sacred gifts given to the Lord are to be Aaron’s and his offspring as an everlasting “covenant of salt” before the Lord (Num 18:19 TANAKH). This valuable food preservative became symbolic of the permanence of the covenant people. In the Christian tradition, Jesus speaks to his disciples and tells them that “you are the salt of the earth” (Matthew 5:14 RSV) (Deatrick 41), suggesting that the disciples are now the most important element of witness to the world. Homer called “salt” divine and Plato named it “a substance dear to the gods” (Casal 75). But why is salt used in the Japanese religious tradition and what significance does it have?

Salt is known to be a preserver from impurity. In the purification rituals of misogi (washing one’s body – similar to the Christian concept of baptism) salt is used in order to remove all “spiritual dirt” from the individual (Casal 75). Within Shinto purification rituals, salt is one of the three items that are offered to the kami (rice and water being the other two) as instruments that ward off evil spirits. Since evil spirits abide within impurity, the purity of the salt drives them away. For this reason, salt is scattered in a location in order to cleanse and purify the area. A good example of this can be seen when a child is born. The room where the mother gives birth is purified with salt (and water) and the mother may also purify herself with salt or a salt-water bath after the delivery. Birth being a source of impurity transgressing the border between the land of the living and the land of the dead it is necessary to purify both those involved (e.g. the mother) and the place of the transgression (e.g. the delivery room) (Norbeck 272-273). Similarly, at a funeral ceremony, two small mounds of salt (known as the shio-hana, salt-flowers) will be found on either side of the entrance of the house. Once the coffin is gone, the house will be purified of any spirits by scattering salt over the floors. Those who attend the funeral will usually sprinkle salt-water over the coffin at the graveside, and will themselves be sprinkled with salt before returning to their homes, all in the effort of exorcising the ghost which might have accompanied the person (Norbeck 275). 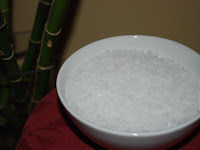 At weddings, salt has two significant meanings. When the bride leaves her family home, the small mounds of salt at the door are used because her departure is similar to that surrounding the death of a person. Because the bride leaves her family’s home and becomes fully integrated with her husband’s family, the bride is considered by her family as symbolically dead (Casal 79). Salt may also be used at the wedding ceremony itself, both as a purifying agent as well as provide the couple the “force of life” which is attributed to salt (ibid). You may also find these little salt mounds (salt-flowers) at the entrances to commercial establishments, like restaurants, stores, theatres, etc. There significance is again two-fold. They first act as a purifying agent that prevents evil or misfortune from entering the particular establishment, but they also act to invite good business and patrons (Casal 82).

Finally, when watching a sumo match, you might have been wondering why the participants scattered salt in the ring. The tradition originated centuries ago when two contending parties entered into a sort of duel in order to sort out their differences, the outcome of the duel being somewhat a divine ordeal that was to be abided by everyone. They used the salt, therefore, to purify the area of the duel and the contenders that would be at the mercy of the mystical powers of the divine (Casal 87).

Salt, in the tradition of Japanese religions, has a sacred quality to it that contributes to the purification of a place or person when borders have been transgressed. It is itself a pure substance that wards away evil and re-establishes order.

online resources for students of Japanese religions and material culture